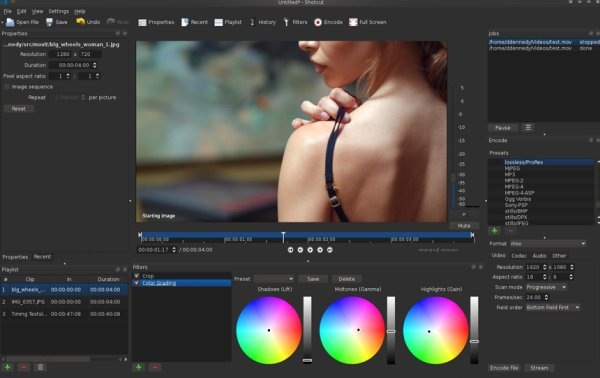 Wide Format Support.
Supports hundreds of audio and video formats and codecs thanks to FFmpeg. No import required which means native editing, plus multi-format timelines, resolutions and frame-rates within a project. Frame accurate seeking supported for many video formats. Videos files with alpha channel – both reading and writing.

Editing Features.
Save and load trimmed clip as MLT XML file.
Load and play complex MLT XML file as a clip.
Drag-n-drop files from file manager.
Scrubbing and transport control.
Keyframes for filter parameters.
Detach audio from video clip.
Presets for most filters and Export – both supplied and user-created.
Sort playlist by name or creation/recording date.
Multi-select items in the playlist and timeline.
Create custom name for clips and enter comments about it.
Low resolution proxy editing to improve speed of seeking and eliminate or minimize scaling.

Quickstart.
You open files by drag-n-drop in addition to the usual menu and toolbar methods.
Tap J, K, L to control playback speed and direction. Tap J or L repeatedly to go faster.
Tap I or O to set the in and out points.
Press left or right cursor keys to step frame-by-frame.
Press page up or down to step one second at-a-time.
Press alt+left or alt+right to jump between start, in, out, and end.

Shotcut was originally conceived in November, 2004 by Charlie Yates, an MLT co-founder and the original lead developer (see the original website). The current version of Shotcut is a complete rewrite by Dan Dennedy, another MLT co-founder and its current lead. Dan wanted to create a new editor based on MLT and he chose to reuse the Shotcut name since he liked it so much. He wanted to make something to exercise the new cross-platform capabilities of MLT especially in conjunction with the WebVfx and Movit plugins.