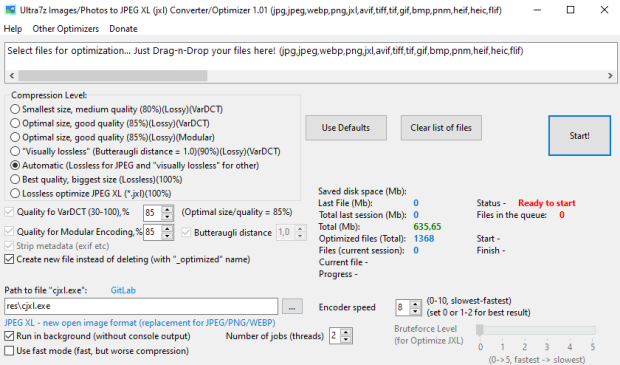 Convert and optimize your pictures JPEG/PNG/WEBP to smaller JPEG XL files (up to 10-60%)! Optimizer for JPEG XL (*.jxl) files (10-15% smaller) in lossless mode. JPEG XL (.jxl) is the next-generation, general-purpose image compression codec by the JPEG committee. It was based on Google’s Pik proposal and Cloudinary’s FUIF proposal (which itself was based on FLIF). High compression ratio – better than your programs / photo camera or smartphone. Lossless JPEG transcoding – about 20% smaller. JPEG XL is a modern image format that provides superior lossy and lossless compression for images. Using JXL, webmasters and web developers can create smaller, richer images that make the web faster. It uses program cjxl.exe. Batch processing of files (drag-n-drop). Program optimizes your file to new one with «_optimized» name ending (source file will remain intact). Reduce the size of your image files in one click with ot without quality loss! JPEG XL images are 60% smaller in size compared to JPEG and 35% to PNG.

Existing JPEG files can be losslessly transcoded to JPEG XL, significantly reducing their size. These can be restored into the exact same JPEG file, ensuring backward compatibility with existing JPEG-based applications. These features are intended to provide a smooth transition from legacy JPEG platforms to the modern JPEG XL. Both the transcoding and restoration are computationally efficient.

WebP is over 10 years old, and JPEG XL is a major upgrade over the WebP format. WebP is limited to 8-bit color depth, and in its best-compressing mode of operation, it can only store color at half of the image’s resolution (known as chroma subsampling). This causes edges of saturated colors to be smudged or pixelated in WebP. JPEG XL supports wide gamut and high dynamic range (HDR).

It includes features such as animation, alpha channels, layers, thumbnails, lossless and progressive coding to support a wide range of use cases including but not limited to photo galleries, e-commerce, social media, user interfaces and cloud storage. To enable novel applications, it also adds support for 360 degree images, image bursts, large panoramas/mosaics, and printing.

JPEG XL offers significantly better image quality and compression ratios than legacy JPEG, plus a shorter specification. It is designed for computationally efficient encoding and decoding using software implementations without the need for additional hardware acceleration, even on mobile devices.

Current file has its own status in the list: «running», «done» and «saved space».
Full stats:
1. Number of optimized files (total and current session).
2. Files in the queue (quantity).
3. Saved disk space (Mb) total and for each file in the list.
(You need to save files «res\size.txt» and «res\numbers.txt» before updating, if you want to save the overall statistics («Total»)).

You can specify the path to the file «cjxl.exe» manually in a separate form.

Program uses ImageMagick for pre-convert of input files and as viewer for JXL files. ImageMagick supports jxl since version 7.0.10-54.